Interview: Kathy Hinde – Sound Designer for Logic of Nothing

We asked audio-visual artist Kathy Hinde some questions about working with us and designing and composing the sound for our latest show Logic of Nothing, which plays at Tobacco Factory Theatres at the end of this month. 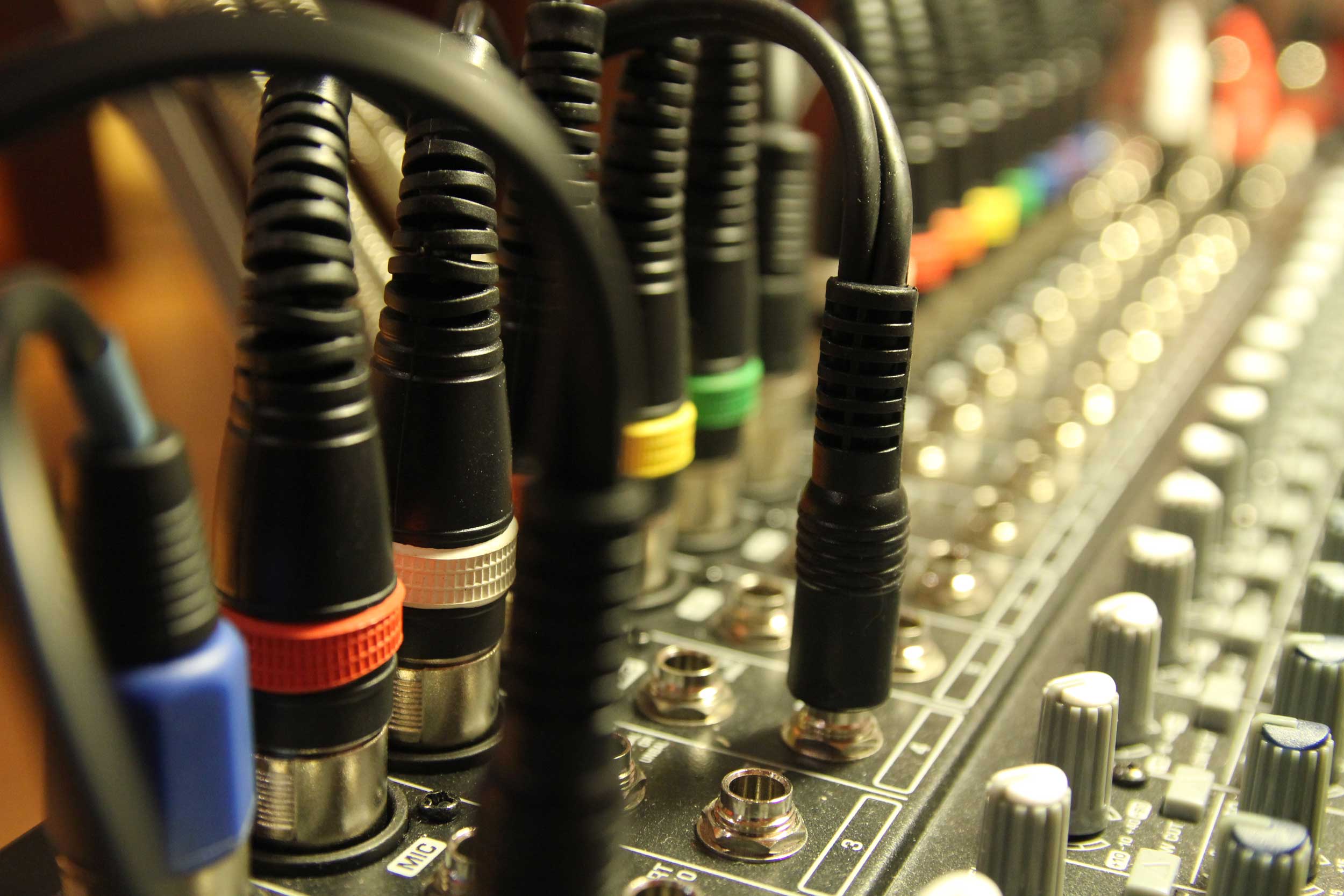 Do you usually solely create sound designs for shows, or is this a small part of what you do?I have created sound and composed music for a few theatre and dance shows, but it is not my main practice (although i’d like to do it more!).

This is actually the first time I have run live sound for a show with so many mics and sound engineering gear!

I am very interested in combining different artforms, which can frequently encompass collaborations with practitioners working with other artforms,( such as in Logic Of Nothing ).
I also work extensively with visual media and regularly use video with sound, and also build installations that have audio and visual connections.

In the publicity for the show it says the sound track is made up of “live samples taken from the contraptions themselves” can you explain how you achieve this during the performance?

There are 21 microphones hidden all over the set ! (perhaps more will be added .. ! )
I made most of the microphones from cheap Piezo elements, which means they are contact mics.
A contact mic won’t pick up any sound unless it is attached to an object, and then it picks up just the sound vibrating through that object.
I chose to work with contact mics because they give a more ‘intense’  internal sound from the objects.  – and also they can make some tiny sounds we wouldn’t normally hear audible, which can be quite unusual and surprising.  For instance, as a metal ball rolls along a metal runway, the contact mic really accentuates the physical movement of the ball – and provides quite an intimate perspective by revealing this ‘internal’ audio.  The mics on Oscar’s desk work particularly well in this way – the sound of the pencil on paper almost gives the feeling we are inside Oscar’s head, thinking of ideas….

This way – the soundscape is perhaps more interesting than it would be had I amplifying the set using normal microphones,  (although there are a few)
–  it works well as all the movements and dynamics of the contraptions are accentuated with live sound (perfectly synced up of course!)

Occasionally i add a special effect  – the zip-wire has a flange effect and the cabinet door has excessive reverb – this is to accentuate particular theatrical moments we wanted to acheive.
In general, the sounds are directly from the mics attached to the stage set. 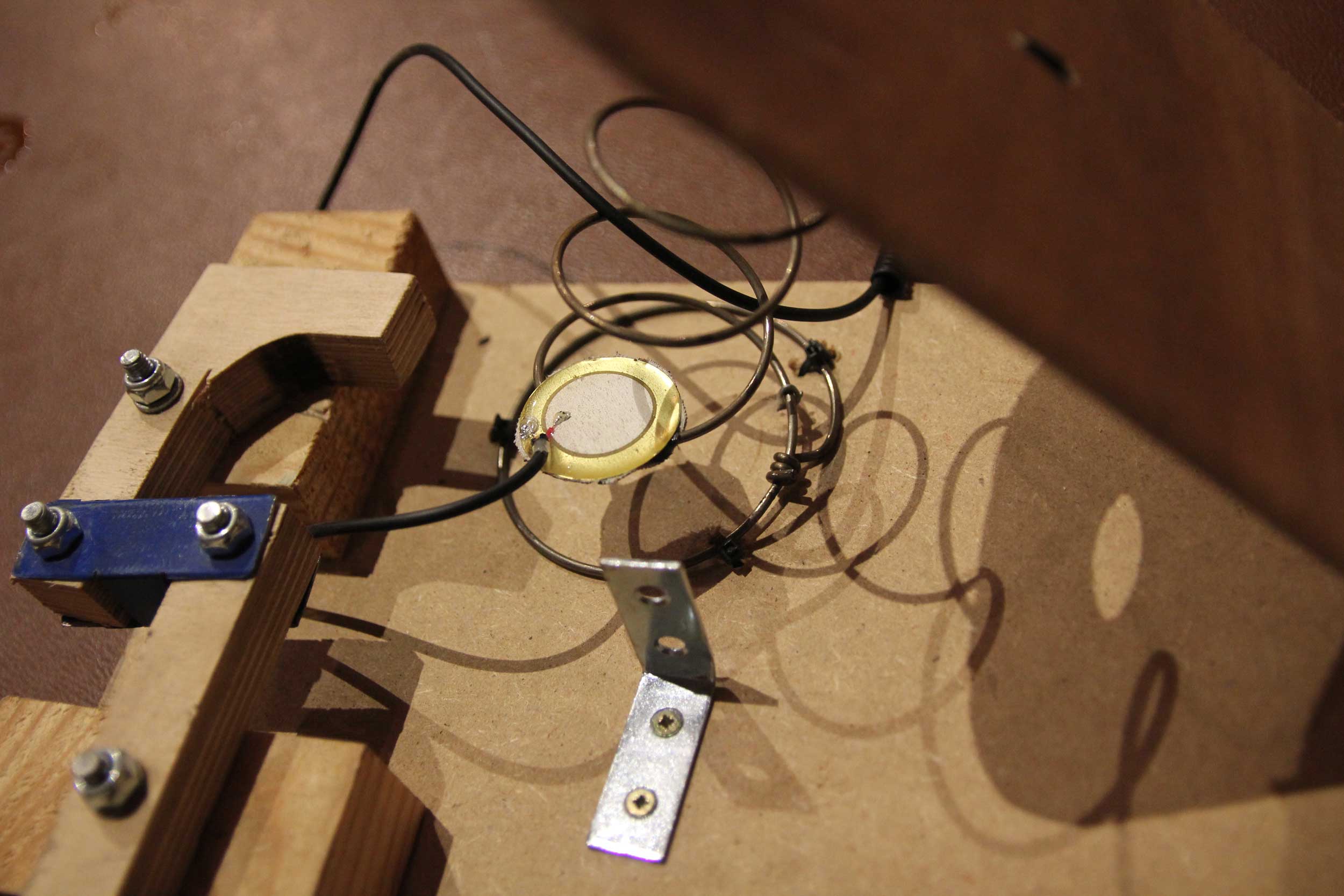 A piezo contact mic (made by Kathy) attached to a ball flinging contraption from the show.

There is some “recorded” music in the show how did this fit with the live samples and was it a challenge to make them work together?

At some points the live sound will merge into a pre-recorded track – but all the ‘recorded’ music is made up from sounds of the objects on stage, and will usually blend into some sounds that are happening or have just happened live….  (except for a short burst of Ligeti’s music from 2001 Space Odyssey.. !! )

Did you set yourself any rules whilst creating the sound design for the show?

Yes – i made sure all the ‘recorded’ tracks used only sounds that had already been heard live during the show  (except space Odyssey!! ).
One ‘cheeky’ way of giving myself more sounds to work from was to put a microphone on a record player that oscar uses…  – so i could ‘sample’ the record.

The record we use in the show is Magic Moments – which was part of the set of records Matt bought from a charity shop (to use in the show).
it was previously used in another scene that is now cut from the show…
but I had already made quite a lot of tracks from small parts of the record – and we really wanted to keep the whistling introduction.
however – on the original record, when Perry Como starts to sing  – the lyrics just didn’t fit  – it was just the introduction we wanted to use….

so – to try and work this out – I downloaded lots of different instrumental versions of Magic Moments – Burt  Bacharach’s orchestra and a brass version.
I then spliced them all together to make a new unique instrumental mix… and we then had pressed onto a dub plate at Bristol’s Dub Studio  (great that this is possible!)

this meant we had the right version of the music on vinyl that could then be played on stage on a small suitcase record player… to be sampled and amplified by a microphone into the main PA mix.

You operate the sound live on stage during the performance, there seems to be a lot of technology involved and you also have some physical roles in the show, do you get nervous about the technology failing or having to “perform”, or is this something you are used to?

things have gone wrong, but there are usually ways to respond to that and do somthing a slightly different way to make up for it.
I like having to operate more things live, as this is more stimultating and active, than playing a fixed soundtrack.
Of course – it is not nearly as involved as Matt’s role in terms of ‘live’-ness !!

The nature of this show means there is a certain amount of flexibility – some things will go differently each time. – which makes it more interesting to operate the sound live on stage.
When thinking about the setup, I always try and work with something that I know will be as stable as possible, and test things a lot of times!..
i don’t have too much ‘performing’ to do on stage,  – but I do quite enjoy it, as this is not something i usually do. 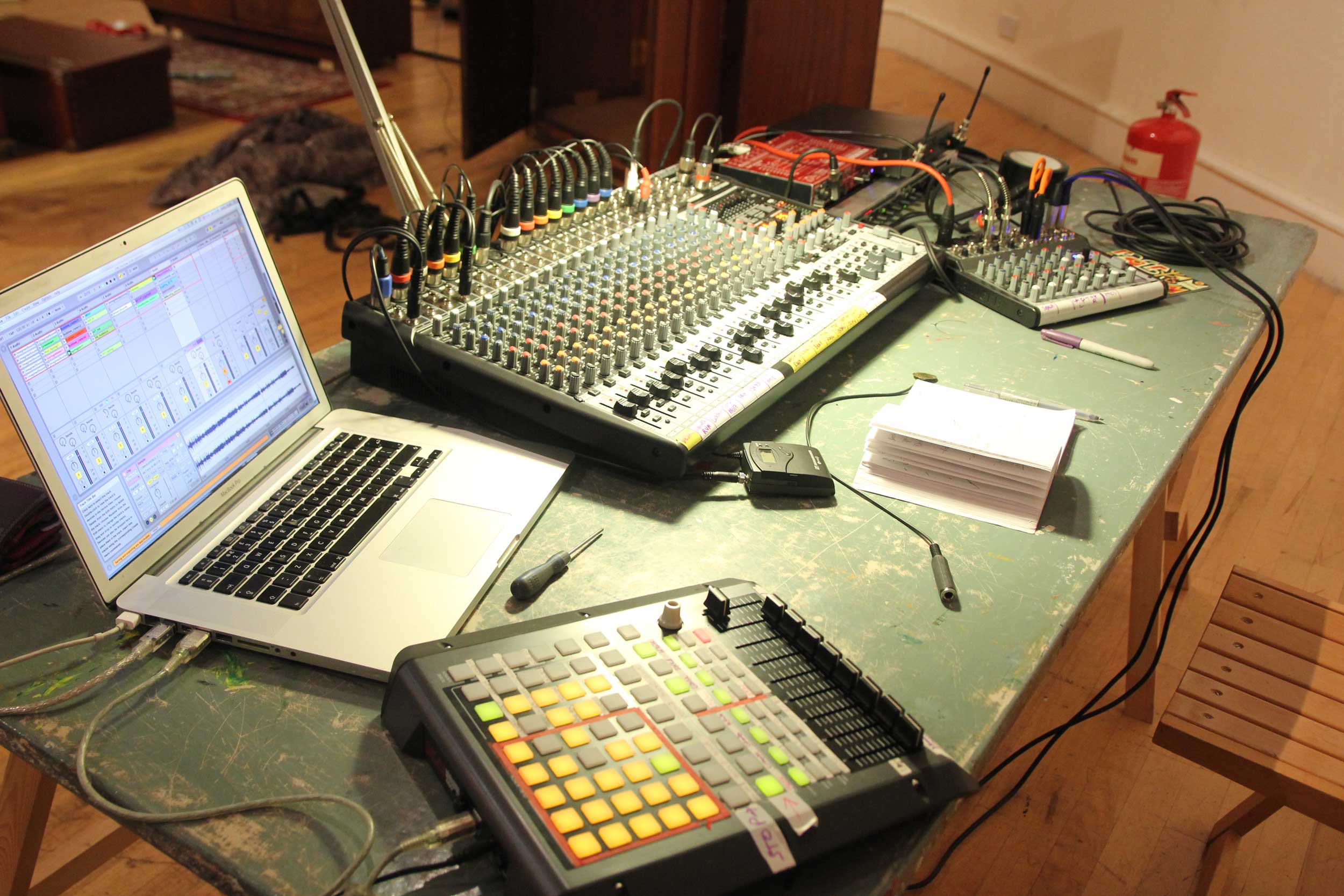 Kathys set-up for the show.

What was most challenging about designing the sound for Logic of Nothing?

Firstly, before we started working on the devising, i needed to work out exactly what equipment we needed – and there were many many different solutions.
So – this was quite challenging, and I learnt a lot about what equipment is available, and the best way to set it up (on a budget!) – also following some good advise from experienced sound engineers.

As we went through the devising process – we instantly knew that the live amplified objects would work brilliantly… but it took me a bit of time and quite a few attempts to find the best way to create the ‘recorded’ tracks  in order to capture the right mood and flavour for the show.
I have not really created music that needs to support humour before, and so this was quite challenging, …. I hope I found the right balance !

What have you enjoyed most about creating the sound design for Logic of Nothing?

I really enjoyed having the restricted palette of sounds (based on my ‘rules’) – to create compositions with.
– it’s such a fun way to work – to discover the musical qualities of these types sounds.

Ultimately – the best part is to do the performance live – it’s very entertaining !

We’d like to thank Kathy for being part of the creative team on Logic of Nothing and for all of her hard work! Check out her website for more info about her and her other projects: www.kathyhinde.co.uk

One response to “Interview: Kathy Hinde – Sound Designer for Logic of Nothing”